Curtain almost up!!! Light some of the lights!!!

Technical difficulties caused some hilarity at La Cage aux Folles, relocated temporarily to the suitably French-sounding Menier Chocolate Factory, on the Rive Gauche beside the Pont de Londres … but somehow the joie de vivre and ooh-la-la were left at the bottom of the costume skip which had clearly been scoured to the limits to furnish almost enough bugle beads and rhinestones to light up this low-wattage production.

Deferred opening and rumours of a diplomatic illness preventing Mr Douglas Hodge from performing added a frisson of excitement to what au fond (that’s yer actual French) was a pretty workmanlike revival of a – I’m sad to realise – 25-year old musical.
It becomes painfully apparent that the Harvey Fierstein “book” is pretty thin, and the dialogues which further the plot feel like pedestrian filler or front-cloth scenes covering the finale scene change.

For that’s what this production is, a panto – there’s no third dimension to any of the characterisations, the plot and the family dynamic momentarily surprising but ultimately superficial, the sentiment is glucose and obvious even to a ten-year-old, but the dame’s frocks are glittery and everyone sings and dances together at the happy end. 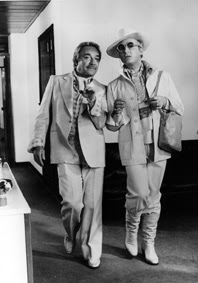 Talking of dames, stand-in Spencer Stafford made more than a fist of his role as drag queen Albin/Zaza and his singing is probably better than Hodge’s would have been, but he’s under-confident and the performance lacks star quality. His comparative youth makes the relationship with “husband” Georges seem unequal.

Talking of unequal, what on earth is a three-times Olivier winner like Philip Quast – for my money the finest ever Javert in a long line of Les Mis performers – doing hamming his way through such a low-rent piece in a very cheap evening suit?

There’s some bizarre casting too. Filling in as a scene-shifter until it’s time to play Madame Dindon in the final scene, Una Stubbs (audience chorus whisper of “I thought she was dead”) is avian and urgently neurotic as though she were still gesticulating film titles on “Give Us A Clue”, and Jason Pennycooke as the butler/maid Jacob lurches between a wig-slipping Sammy-Davis-in-drag impersonation and crudely executed pratfalls.

Menier Chocolate Factory has steadily sneaked its prices up to £25, which for bench seating in a small basement is dangerously close to real seats in the West End, and audiences may feel increasingly reluctant to apply the allowances usually made for fringe venues.