I’m doing some work with a film company who are making a pilot for a new TV travel show and as part of the research I’ve been to a couple of “tourist attractions” like the Royal Pavilion in Brighton and the Imperial War Museum in London. It’s caused me to reflect on the nature of tourism, having seen so many visitors to Britain stumbling blindly from one set piece to the next.

I begin to wonder, is tourism what we do to fill the gaps between lunch and tea? Are all those carefully preserved and restored National Trust houses merely tea-shops with a little predigested history attached? For every earnest cardiganed mature lady studying the guide book and peering at the artefacts, there’s a whole swathe of disinterested folk gazing into the middle distance wondering when it’s next time for a chocolate muffin and a cappuccino. 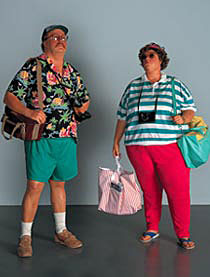 Am I guilty of this myself? I know that I sustain myself through all “country walks” with thought of what cake to have at the end of it, but do I also do this in visiting galleries, or museums or palaces abroad?

Did I shuffle round the Louvre or the Uffizi or the Hermitage just ticking off the highlights but all the while thinking of the choices for dinner?

I think the answer is “sometimes”. Maybe not the Hermitage, since dinner in pre-privatised Leningrad hostelries was universally dire.

I remember being vastly annoyed with the talkative Australians who had to be shushed all the time by the guardians in the Sistine Chapel last September, but the guardians were noisy by Italianate standards also. I would have loved to sit and study the ceiling in silence, and also without a couple of thousand people in dripping outerwear (it was the wettest September Rome had seen in a hundred years). I’m not a highbrow, but I’m not a philistine either, and I wonder just what is the “appropriate” way to enjoy and assimilate museum culture.

I seem to be going through a Nazi phase, too. Well, not in my personal life although there was a strangulation moment in a recent bout of passion when piano wire could have been handy – but because I’ve seen a couple of Second World War exhibits which resonated strongly. 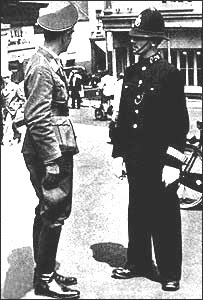 The first was the War Tunnels and Underground Hospital in Jersey (Channel Islands, not across the Hudson) where the reconstruction of the occupation is strikingly presented, and the shame of Churchill’s abandonment of the Islanders brought sharply into focus.

And then the Holocaust exhibition at the Imperial War Museum which is damning in its dispassionate and factual accounting of the numbers and the processes of the concentration camp system.

I met some people recently who had been to Krakow in Poland for a pleasant weekend, and visited Auschwitz on an excursion. I think this may be a thought drawn from a recent BBC documentary on the subject, but you have to wonder … is there a gift shop? Do they sell souvenir chocolate, or tea towels? Or soap? And where do you eat your sandwiches?