On a whim, I’ve been for a weekend on the Suffolk coast at a property owned by Ruth Watson, the somewhat painted-and-decorated star of Channel 5’s “The Hotel Inspector”. 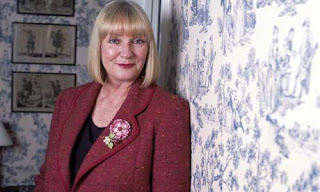 For the uninitiated, this is a programme in which she dispenses caustic advice and a general browbeating to the faltering proprietors of lesser establishments with decor, staff, marketing or hygeine problems.

Naturally, you’d expect her own business, the Crown and Castle Hotel in sweetly pretty Orford, to be exemplary.

It’s exemplary of something, but not fine hotelkeeping.

The decent enough hotel building (for ‘hotel’ read comfy old pub) has been extended into the garden (for ‘garden’ read car park with attached scrap of grass) by a row of what can only be described as Butlin’s chalets – a terrace of pitched roofed, clapboarded, glazed front doored hutches each containing a normal sized double bedroom and a small bathroom. 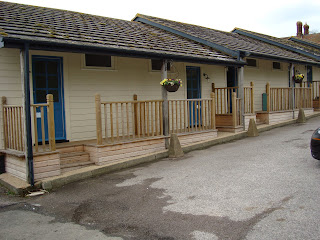 The compromises and the cheapness are everywhere: no wardrobes, just a chromed metal railing with coathangers and a snappy note about not pinching them (more about the snappy notes later), tub chairs too small to sit on, nineties-trendy but now just scratchy seagrass carpet, disposable plastic water glasses and vinyl flooring rather than tiles in the bathroom and a teeny-tiny flat-screen TV with an irritating blue standby light that glows so brightly in the night, you’d think you’d stumbled into a particularly cataclysmic episode of ‘The Bill’.

All of which would be fine, if this was a typical British B&B at the national average rate of £60. But our room cost £155, which is more than going it a bit for a wintry Sunday night in off-season early March.

And I never expected the cobweb.