In a somewhat lager-fuelled discussion about writing, after last week’s session of The School of Life, some of my classmates challenged me to produce a ‘No 1 Ladies Detective Agency‘ story, in which Mma Ramotswe travels to England and visits a relation who owns (and it’s a genuine place) the ‘It’ll Grow Back’ hair salon in Hackney. 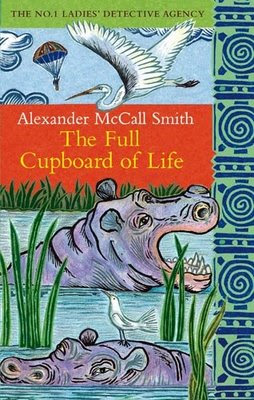 Outside the offices of the No. 1 Ladies Detective Agency and Speedy Motors garage, the early morning traffic made its way along the Tlokweng road. Since it was very early morning, much of this traffic was animal rather than mechanical as the lurching overfilled minibuses bringing workers to the offices and retail establishments of downtown Gaborone competed with unmilked goats and two cows being herded to the livestock market.

This last sound caused Mma Ramotswe to look up from drafting her list of things to do. She had considerable respect for cattle, even for the two gaunt and rangy specimens outside her door navigating the potholes and stony obstacles of the Tlokweng road unaware that their ownership was to be changed forever later that morning for a few hundred pula. For it was due to the diligence and foresight of her dear late father, Obed Ramotswe, farmer and herder of cattle under the wide Botswana skies, that she owed her modest inheritance and her ability to found the first Ladies Detective Agency in the country.

Mma Ramotswe scratched some items from her list and added others. The early morning was the best time to do anything, particularly in the hot season. In the hot months, before the rains arrived, the temperature soared as the day wore on until the very sky seemed white. In the cool of the morning, when the sun barely warmed the skin and the air was still crisp, any task seemed possible; later, in the full heat of the day, both body and mind were sluggish.

It was easy to think in the morning – to make lists of things to do – in the afternoon all one could think about was the end of the day and the prospect of relief from the heat. It was Botswana’s one drawback, thought Mma Ramotswe. She knew that it was the perfect country – all Batswana knew that – but it would be even more perfect if the hottest months could be cooled down.

The list, as most of Mma Ramotswe’s frequently-produced ‘to do’ lists, featured a very large number of administrative and organisational items which could be ticked off with mounting satisfaction as the morning progressed, in keeping with her philosophy of undertaking as many tasks as possible before the heat of the day laid waste to plans and rendered the most diligent and industrious of personages physically weakened and mentally exhausted.

Today’s list included some serious duties connected with passport and visas, and reminders to telephone certain government departments appointed to oversee the proper procedures for arrival and departures of Botswanan nationals across its borders, to make a visit to the Mall branch of the First National Bank of Botswana to order foreign currency, the requirement to make photocopies of her sponsorship letter and the health certificate recently initialled and solemnly stamped by Dr Leonard Modisapodi in the surgery of his small house just off the Gaborone end of the Tlokweng road.

None of these caused the least trepidation within Mma Ramotswe. That inner anxiety she reserved totally and exclusively for the first item on the list.