I’ve been to Dubai on business and ate one night at “Verre”, the Gordon Ramsay branded a la carte joint in the Hilton and I have to say it was one of the most irritating and boring evenings I’ve ever had in a restaurant. 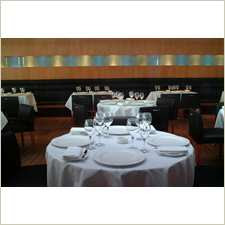 Firstly, it’s uncomfortable – the tables are too close together and there’s no view nor interest in the decor, not even great flowers or arrays of wine bottles, it’s a pretty bland dull room. The French-ified manager exudes so muchhauteur even Gordon would have a problem to slap some customer service out of him, and the mostly Indian waiters whilst charming have been drilled into formulaic, scripted service which saps the life out of the whole experience, and leaves you feeling exhausted and processed.

The presentation of food is fawning and beyond pretentious. “May I present your pre-starter starter”, “Did you enjoy your amuses-bouches”, indicated the number and incidence of the additional courses which mean you don’t really need to order more than two or three from the menu because you could almost make your meal off the introductory basket of chicken pate, boursin profiteroles, pastry straws and a spiral-whipped turd of aubergine puree, the pre-starter pouring of soup with cream and caviar, the pre-dessert dessert (a vile concoction of fruit and shaving foam which reminded me of the Lyons Maid “peach parfait” plastic cone ice creams we had at Saturday morning cinema when I was about ten), the petits fours and the complimentary chocolates.

Everything has four too many ingredients – and the humourless management won’t permit any variation to the order, portion control is clearly king … when I suggested I might prefer more scallop and less pork belly in my oddly combined starter, the manager said “it’s three pieces scallop and two of pork, take it or leave it” … and I wish I’d left it.

The scallops were OK, but the caramelised pork belly roundels were greasy and nasty, and the pan-fried watermelon ‘earplugs’ (because that’s what they looked like) that accompanied it were downright laughable. I mean, who fries watermelon?

Fillet of beef was a small serving but a nice cut, and the menu listed the many accompaniments including caramelised salsify, celeriac puree, mousseline potatoes and madeira jus. When it arrived in a wobbling tower of mushroom duxelles on unexpected spinach foundations and with a fried quail egg slimily perched on the top, I could cheerfully have thrown it across the room. Egg is such a popular allergy, why not mention its presence on the menu?

By the time I’d worked my way through the inter-courses to the sickly chocolate and caramel semifreddo, I was bored beyond my capacity to enjoy the experience and just wanted to get out of the place, and breathe.

My fellow diners were mostly middle-aged British couples too awed by Ramsay’s TV fame and their opportunity to worship at the shrine to realise that this was over-complicated food with pompous service which feels outdated and claustrophobic.

I just wish Gordon had been there so I could have told him to his face.