I’m not happy about my cleaning lady.

That sounds SO Bree van de Kamp that I have to apologise and explain. I’m not complaining about her work, Rahat is an exemplary cleaner.

She’s neat and pleasant, turns up on time, doesn’t take phone or toilet breaks during the three hours that she’s busy, and apart from a bit of wistful sighing which she seems capable of making audible even over the vacuum cleaner, you almost wouldn’t know she’s here.

I’ve had worse, too. 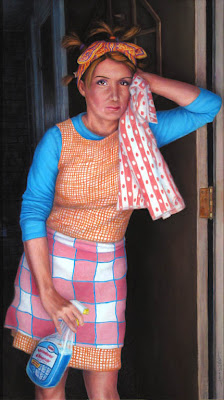 Including Robin the Prozac-cheerful gay dwarf who used to spend more time gossiping and smoking on my balcony than actually dusting. And Genghis the plump Mongolian boy who used to clean all my floors and windows vigorously until I returned unexpectedly early from a business trip one wet Sunday after midnight to find him stark naked on my sofa with the TV on and his clothes in my washing machine. Apparently his wife had thrown him out, with police assistance.

What upsets me about Rahat is her situation. She’s from rural Kyrgyzstan, a central Asian state so troubled and politically corrupt it’s beyond even the satire of Borat. I’m guessing she’s not yet 30, but she’s divorced from an arranged marriage and has two children aged 5 and 8 left in the care of a grandmother whilst she comes to Britain for English language lessons and to clean ten flats a week in London’s docklands.

This is the bargain so many non-European migrants have to make in order to enter the UK and work. Only student visas are available to them, so they must enrol in expensive language schools and offset the cost against their potential earnings, which are supposed to be restricted to 16 hours a week, but usually aren’t.

She – and I guess about forty workers in similar situations – are managed by a perfectly nice man called Jacob who used to be head porter in our apartment complex, but is I suppose technically their gangmaster. He seems so readily able to provide instant replacements when one of his cleaners is ill or absent, that I used to joke he kept them in a container on the dockside. But I’m feeling less and less flippant about the whole operation.

Understandably she misses her children, but she lives in a shared house in Charlton (one of London’s poorest neighbourhoods) with about seven or eight other women who speak Latvian or Lithuanian. Kyrgyz people speak either dialect Russian or Turkish, so she’s even more isolated. She’s going home in August, after almost a year in England, and must return after just three weeks with her family …

How could you do that, with small fatherless children to care for? It’s unthinkable, and yet middle class Londoners are thinking – and postrationalising – this sort of situation on a daily basis.

I don’t pay her unfairly, more than the local going rate or the national minimum wage, I don’t beat her, and I try to give her some extra at Christmas or holiday times. So why do I feel such a shit for employing her, and how could it improve the situation for either party if I didn’t?

With London flooded with Poles and other northern or eastern Europeans who have acquired working rights through entry to the EU, these poorer emigres from the former Soviet states are picking up the work even the Poles won’t touch, and in some circumstances at wage rates which don’t allow any discretionary income once housing and air fares and language schools have been deducted.

On my way to work on a Middle Eastern building project in the mid-80’s I once saw a bundle, and there’s no other word for it, of Sri Lankan women at Bahrain airport, they were changing flights for destinations in Saudi Arabia. Each one wore an identical pink polyester sari, and carried a brown manilla folder with her personal details. Some were barefoot. They were almost tagged with luggage labels. Clearly they were being shipped by an agency to work as maids in Saudi households, and it looked smelt and felt to me like 20th century slavery.